The photo entitled “Mexican family around table” displays, for the viewer, what appears to be a very quaint setting involving members of a Mexican family. There are 8 people in the photo all together, along with one cat, and three of the subjects’ faces are hidden from the camera. In the center of the photo, there are three children of varying ages together. Among the people in the photo, there is a kitchen table with some food and a basket on it. There is a bench next to the table where two of the subjects are seated. In the background there is cabinetry that is holding plates and bowls. On the floor next to the table is a bowl, which could be assumed to be a water or food bowl for a pet. Of the 8 people in the photograph, only two of them are performing recognizable actions. The one seated at the table is eating and the other, in the background of the photo, appears to be cleaning or cooking. From the setting and items in the image, along with the attire of the subjects, the family seems to be middle class. However, the lack of an abundance of food, seeing as the food on the table is quite scarce, allows for the possibility of this family being perhaps of low income, or struggling to provide for itself. The three children together in the middle of the photograph have looks of concern or distress in the faces, which shows that they may be aware of the difficult times their family is facing. Some questions that I am left with are what is this family’s main source of income and if the children in the family also work. http://digitalcollections.smu.edu/cdm/singleitem/collection/mex/id/481/rec/2 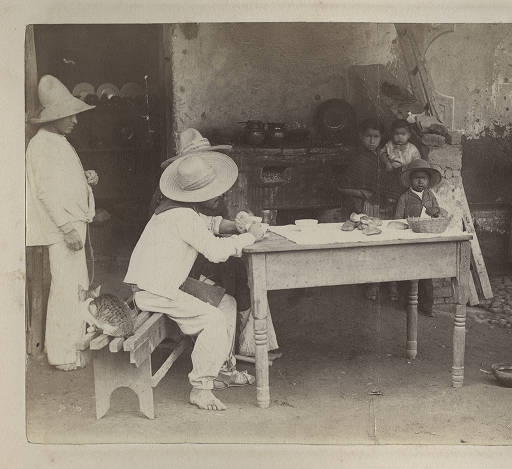 The photo “Smarth Brahmins” by William Johnson is an image of Indian culture through its display of individuals. In the photograph, there are two Indian men. The two men are seated on the floor and around them there is a basket, a vase, and what appear to be candlestick holders. There is also a wooden board that holds what appears to be some type of food. One of the two men is seated facing towards the right side of the image and reading some piece of paper. The other is facing the camera, smiling and holding something elaborate, perhaps a book, in his lap. While the two men are not entirely clothed, there clothing is intricate and one of the men’s is wearing body paint. Judging by their attire, this men may be either religious figures or wealthy. The photographer, by choosing these subjects, shows the difference in cultures between Indians and people from the west. By showing these men in traditional attire, which does not cover all of their torsos, the photographer displays Indians as perhaps being less developed than the cultures of Europe and the new world. Questions this photograph makes me ask are who are these men and what is their role in Indian society as well as why the one man is facing away from the camera. http://digitalcollections.smu.edu/cdm/singleitem/collection/eaa/id/711/rec/5 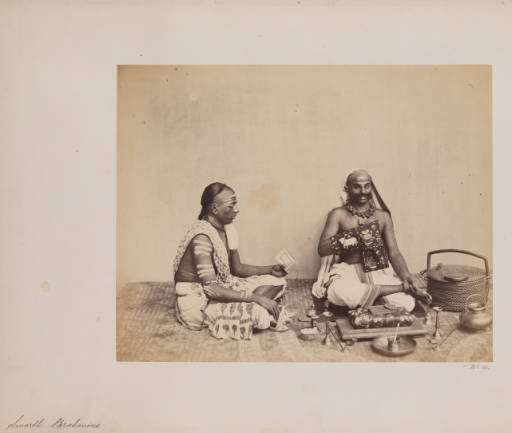